Endowment is a special-purpose capital of a non-profit organisation, created by means of donations. The organisation invests such capital (usually in management) and uses the income from the investment for its own purposes. The endowment itself is preserved,  providing a reliable and long-term income.

Endowment culture in Russia
The endowment culture in the Russian Empire (they used to be called "perpetual capital") equalled a foreign culture.
However, after the revolution, such institutions were nationalised and switched to state funding.

Endowments returned to the legal framework only in 2007 with the adoption of the law on endowments. Endowment culture began to develop again, and these days Russia is lagging behind Western countries. For instance, only universities in the USA have four times more endowments than all Russian non-profit organisations combined. The size of endowments is also incomparable.

Today Russian endowments are showing steady growth. In 2007 the country had only 19 endowment funds, while by the end of 2019  221 funds had been already registered. In 2020, Sberbank estimates more than 230 endowments in the country. According to rating agency "Expert", they have a total of 32.6 billion rubles at least. 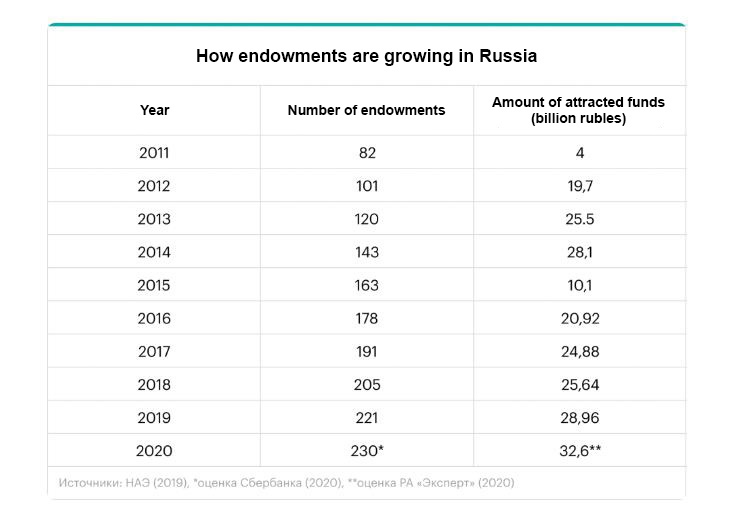 Endowments are most actively used in education: 62% of Russian endowments belong to this sector,

Endowments in the sphere of charity and culture are tied for the second and third places with 13% of total assets each. Furthermore, culture is the only sphere where the government stimulates the development of endowments, by giving fund donors the opportunity to claim a tax deduction.

Targeted endowments are also emerging, such as school endowments. Although these endowments are not very large (Moscow Gymnasium № 210 has 15 million rubles and Ekaterinburg Gymnasium "Corifey" has 45 million rubles), however, their number is growing. Endowments enable schools to improve quality of education: implement innovations, attract young talented teachers and provide grants to students. Therefore, the number of such foundations will grow.

Endowments have been perceived by the public as an effective tool for over 13 years: while the first endowments looked like an unusual additional source of funding, today endowments frequently become the basis for non-profit projects.

These developments have already had an effect: while in 2018 the total volume of Russian endowments grew by only 3%, in 2019 it grew by 13%, and by the end of 2020 analysts predict a similar growth, despite the downturn in the economy. Perhaps there comes a time when even small and unknown organisations can ensure their development with the help of an endowment.